QNIB Solutions (early on called 'QNIB Inc') derives from the first project Christian did during his B.Sc. report, a InfiniBand monitoring suite.
For the sake of the report is was named 'OpenIBPM: Open Source InfiniBand Performance Monitoring'. Afterwards Christian renamed it to match his last name (Kniep): 'QNIB: Qualified Networking with InfiniBand'.
Since then QNIB becomes a pet project's theme... 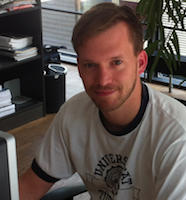 Christian passion is to improve the ease of use of those stubborn machines we call IT equipment.

He started at the dawn of the Euro (2002) as an generic System Administrator, installing desktop and server systems running MacOS (9/X), Windows and Linux. Since then Christian iterated through support positions, mostly in an automotive R&D context. He maintained end user applications, virtual reality systems (functional/esthetic), in-house infrastructure and shifted towards HPC cluster environments. At the latest non-R&D position Christian was in charge of an InfiniBand network with a couple of thousand nodes.

In 2013 he moved to Paris to work as an R&D Engineer in the HPC section of Bull SAS. His job (and passion) was to help shaping a Log and Performance Mangement solution that will withstand the node increasement introduced by the next generation of supercomputers. At the end of 2014 Christian moved back to Germany to persue his passions in a more unconstrained fashion. After working for a local-commerce StartUp he switched to Playstation Now in mid-2015 to help containerize their stacks. Two years in Christian changed to work as a TAM for Docker Inc taking care of EMEA accounts in a technical advisory role.

After the business side of Docker Inc was sold, Christian became a 'Senior Specialist Soulution Architect for EC2 Spot' at AWS in 2019 and became the first Senior Developer Advocate for HPC&Batch within the HPC product team of AWS. In 2022 Christian left AWS to once more pursue his passion project to push container usage in HPC by getting back to MetaHub (list of blob posts).