Containers gain more and more foothold as a lightweight mode of isolating different application relying on kernel features to not spin up emulated hardware - create (rather) heavy virtual machines. That worked great so far, as the resource isolation was only focusing on what the kernel can provide:

Due to the advent of acceleration cards - most prominently GPUs; two or three years ago- containers are more and more willing to break out of the host kernel context, accessing those cards. Since the kernel is only involved for some control work, it is a challenge.

In order to use these devices three additional pieces need to work in concert:

The following schema shows the representation for the most common use-case these days: a GPU, more specific a NVIDIA GPU. 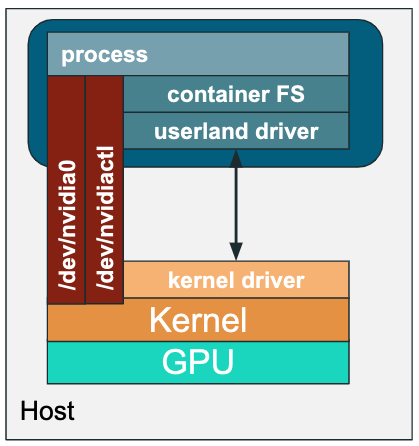 A rather easy piece in this trinity is the passing the device from the host to the container. Docker is able to pass-in devices using the flag —device=/dev/nvidia0 almost from day one. Since the above is located in the Docker-API and workloads are scheduled using some kind of orchestrator - because you ask for trouble if you do it with docker run) it comes down to support from your favorite orchestrator. Kubernetes introduced Kubernetes Device Plugins a while back in v1.9 it is commonly used as of today.

Device Plugins have some limitation as of today, but they provide as a first shot of what is possible. The two things I am banging my head against the most is

But I am patient, as the Kubernetes community is fast paced - discussion is already on the way for the next version of resource plugins.

For now it comes down to attach devices according to some resource request and scheduling.

I create one (qnib/k8s-device-gpu) back in the days.
note-to-myself: needs an update to only limit it to pass through devices.

Ok, now that we have the boring stuff out of the way - let's talk about the drivers.

To make a particular GPU run, the user-land driver (CUDA toolkit) needs to match the kernel driver (CUDA driver). If not, you will get a complaint. Say I am on a g3.xlarge box from AWS with Ubuntu 18.04 and the package nvidia-396-44 installed - the CUDA driver tied to CUDA 9.2.

How it is done today

A common way of overcoming the issue, runtime (or wrapper of runtimes) evolved, which just bind-mount the driver from the host. nvidia-docker does it that way, even though after three years and with NVIDIA being the company that controls the complete stack; I am pretty sure they are good in what they are doing and it is just the most practical way. 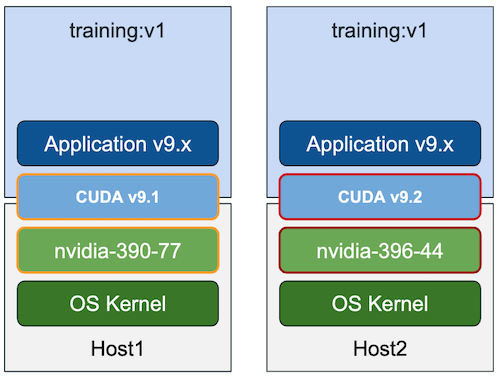 Problem I have here is that the container file-system and the runtime configuration is changed at runtime, depending on what host the workloads is scheduled on.

Oh my goodness... With that in mind - how to improve the situation?

A container per hardware configuration would be nice... 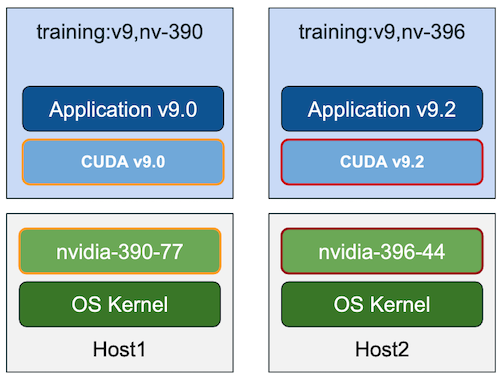 No matter what hardware is added, the mapping between the image for host1 and host1 stays the same.

Running an image that incorperates CUDA90 (encoded into the image name via nccl90) and thus expects the kernel driver nvidia-390-30 will not work:

Let's ignore that Tensorflow expects the latest and greatest GPU (with Cuda capability > 7.0). The container matches the CUDA driver and we are good to go.
Even though one thing anyones the performance loving container junkie:

Your CPU supports instructions that this TensorFlow binary was not compiled to use: SSE4.1 SSE4.2 AVX AVX2 FMA

TensorFlow just does not recognize the Broadwell CPU provided by the box. All nice instructions are unused. :/

So let us use yet another image, compiled to utilize the Broadwell architecture (CFLAGS=-march=broadwell).

But do not get overexcited - even though I build an image for the latest Skylake with AVX52 (skylake-avx512), the CPU does not support the latest, so TensorFlow fails.

At the end of the day I need to compile NCCL and Tensorflow with CUDA_COMPUTE_CAPABILITIES=5.2 to support the M60.

Does not help - yet?

Building these images is only fun when you do not have to do it manually. So I use GoCD to compose the images.
Even less fun: Picking the correct image for the underlying node - if that would be easy people would have already done it two years ago...

I will address both issues in the next slides later this week (blog post is out)- so stay tuned. :)