But don't you worry guys, I have a nice one this time, I promise.

Even though - CAUTION! - if you have kids in the room, who honour security by not messing around with ssh, be advised that it might be a tough ride...

I went to Lugano again to talk about Docker in HPC, as always it was a breeze. Nice talks about D-Wave, FPGA, GPU, Deep Learning and on it goes.

I talked about Linux Containers with an emphasis on the issues we face and how they might be overcome.

As I pointed out, in my opinion the power of docker today is empowering the developers/end-users/scientist to iterate faster on their task. For developers that is easy, as they have a simple setup.

For HPC users or scientist it's harder because they need a distributed system. As long as they can work on one box it's as easy as developing code. 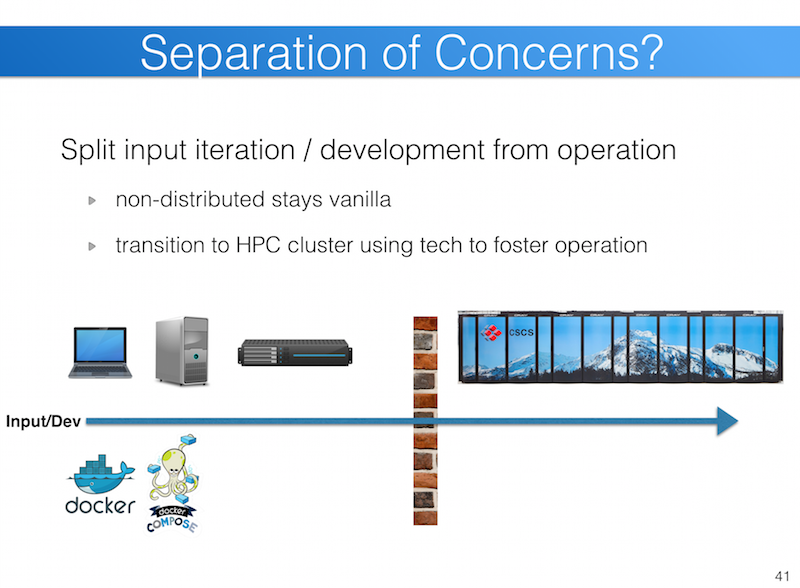 But once they want to cross over to a multi-host setup they need sshd to login to the remote node and slurmd to register the node in SLURM. One could setup both on the bare-metal host and try fishy things, but it's not getting simpler.

UPDATE: As I realised in the next post I was slightly wrong. The plain mpirun needs sshd/rshd for remote execution; slurm forks the orted daemon using slurmctld.

I can run the hello world on a remote host with two tasks.

By stoping the sshd I am blocked...

But how about I use a different command to start the process?

It even works with three nodes.

... rather to the keyboards... I would like the MPI projects to implement this behaviour directly.

I host the Docker Workshop at the ICS 2016 in June. If someone can implement it in a nicer way, I am more then happy to provide 20min to talk about it. :)